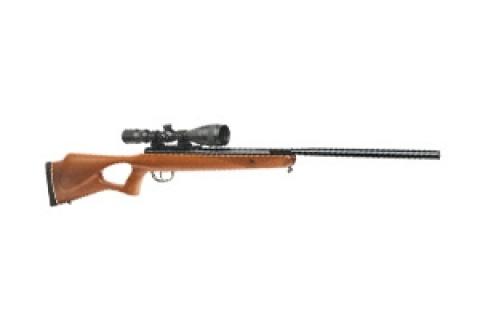 Like so many other hunters, the first game I ever shot as a kid was with a Daisy BB and pellet rifle. I wreaked havoc on many a small furred or feathered critter with that pump air gun until it finally wore out. I then graduated to a more powerful .177 pellet rifle, then a 20-gauge shotgun, and on from there. But that first little gun helped me master such essential hunting skills as stalking, which serve me well to this day.

Air rifles have come a long way from what I used as a kid. Sure, the old Daisy Red Ryder is still available and great for plinking and target shooting, but other models are sophisticated technological marvels that are more than adequate for taking pests, rodents, varmints, small game and even predators out to .22 rimfire ranges. Believe it or not, some of the latest and greatest can even be used on hogs.

Air guns use air (or CO2) to drive a pellet down the barrel, and there are a variety of “power plants” that are used to do so. Let’s look at what’s out there.

A break-action rifle is powered by moving a spring piston in the receiver as the hinged barrel is cocked downward. The piston moves to the rear against a strong spring and is locked in position by the sear. When the rifle is fired, the piston is pushed forward at high velocity to compress the air in the chamber. This air flows out of the chamber against the base of the pellet, forcing the pellet down the barrel. Many such rifles are capable of velocities of 1,000 feet/second or more, but because the spring is so strong, a considerable amount of force is required to cock the rifle. Although these guns tend to be inherently accurate, the heavy piston and spring ramming forward as the pellet is being driven down the barrel causes recoil, which can make it difficult to accurately shoot a powerful break-action gun.

While a regular break-action air rifle is loud, break-actions with gas piston technology are much quieter. This makes these models a great choice for hunting. Rather than a coiled spring, these guns use a gas-filled piston. Besides being quieter, they are also easier to cock and have much less recoil, both of which are great for accurate shooting.

Some air guns are designed so that repeatedly swinging the forearm of the gun downward and back up forces air into a chamber where it is held under high pressure. Each pump forces more air into the chamber, increasing the pressure and thus the velocity of the pellet. As several pumps can produce high pressure, these rifles tend to be high powered, capable of firing pellets at up to 800 ft./second. They have virtually no recoil and tend to be very accurate, and also quiet when powered by just a few pumps.

These models use a small canister or powerlette of liquefied carbon dioxide gas housed within the gun to provide power for a high number of shots without any pumping, often at velocities approaching 700 feet/second. They are quiet and tend to be very accurate. This system is commonly used in air pistols. However, this power source is impacted by air temperatures, with lower pressures and lower velocities resulting when temperatures fall below 60 degrees.

These guns are known for accuracy, quietness and ease of shooting. They require you to fill (or pre-charge) the gun with air prior to shooting, using either a scuba tank or a hand pump. Some are equipped with a built-in pressure gauge for consistent and accurate pressurizing. The number of shots that can be fired with each charge varies by model.

These represent the latest technology in air rifles, and the most powerful. They differ from traditional PCP airguns in that you can precisely regulate the air pressure in the reservoir by varying the amount of pressure released with each shot as needed, allowing for more shots per fill. An LCD panel indicates the number of remaining shots based on current settings. When dialed to the highest setting, these guns are capable of taking game the size of a boar or small antelope.

Virtually all of these types of air rifles are available in .177 or .22 caliber. Many of the more powerful models are also available in .25 caliber, with the most powerful ePCP models available in .357 caliber for game the size of predators or larger.

This is off canvas menu widget area. To enable it add some widgets into Appearance – Widgets – Menu Section, and go to Customizer – Main menu to set the icon position.

Support Businesses That Support Your Lifestyle