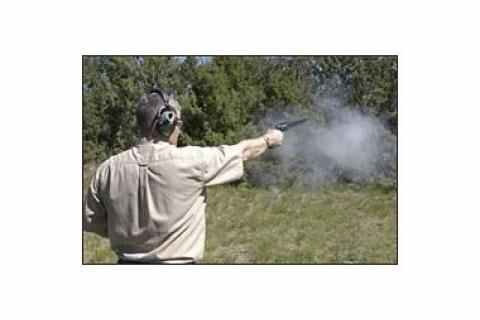 For those looking to recreate a little history of their own, cap and ball revolvers are a great place to start.

When most Americans think of single-action revolvers, they envision scenes of the Wild West and shootouts at the OK Corral. But the history of the revolver actually starts back in 1836, when Colt filed a patent for the first revolving firearm. It could be said that Colt was a bit ahead of his time, for the 1836 model didn’t set the world afire, and by 1842, Colt’s Patent Arms Manufacturing was out of business. But with Western Expansion, the Civil War and numerous Indian wars right around the corner, a gun that could fire several rounds without reloading was needed. By 1847, Colt was back in business and there was no looking back. The rest, as they say, is history.

For those looking to recreate a little history of their own, cap and ball revolvers are a great place to start. With so many different styles to choose from, selecting the model that is right for you can be a daunting task – here is what you need to know to get started along the cap and ball path.

Cap and ball revolvers fall under two main categories – the Colt style and the Remington style. While there were numerous other small manufacturers producing revolvers of different styles in the 1800’s, these first two manufacturers accounted for probably 90% of the period revolvers and widely influenced modern revolver design. At a glance each style can be readily recognized by the top strap (the portion over the cylinder) or lack thereof. Colt’s do not have a top strap, while the Remington’s do. Due to this difference it should be noted that the disassembly, and sometimes loading, is slightly different for each style; shooters need to refer to their particular firearm’s owner’s manual for specifics. 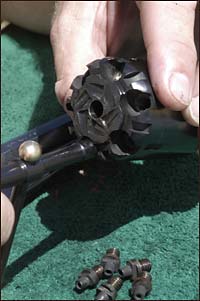 Aside from the main design differences between the Colts and Remingtons, various frame materials were also used during different time periods and between models. Sometimes this simply had to do with style, but more often than not (such as during the Civil War when the South was low on steel and substituted brass) it was due to necessity.

Like the originals, modern replicas are also offered in different frame materials ranging from blued and case-color hardened steel, to brass and even modern stainless steel. While the various steels are the strongest, brass is also suitable for the low working pressure generated by black powder and brass gives a unique period look.

In addition to the two main styles and different frame materials, firearm collectors will be pleased to see that Fire Arms Dealer USA offers many faithful reproductions of obscure barrel lengths and designs ranging from diminutive pocket revolvers to the extremely large frame Walkers.

A cap and ball revolver, as the name implies, fires lead round balls. These are generally several thousandths of an inch oversized and are used without a patch. When pressed into the cylinder they are swaged to the exact size. While balls are the primary fodder, in some situations, conical bullets can be used. However, for the sheer ease of loading and inexpensive shooting, lead round balls make up the bulk of projectiles for cap and ball enthusiasts.

Many people shy away from cap and ball revolvers simply because they appear hard to load – actually nothing could be further from the truth. Yes, loading is time consuming, but it is not hard. To begin with, place a percussion cap on each empty cylinder and discharge in a safe direction – this will reduce the chance of oil (left over from the last cleaning) contaminating the powder and/or cap. Remove the spent caps and measure loads of powder (per the directions in the owner’s manual). Pour the powder in each cylinder. Place a ball on the mouth of the cylinder and depress the loading lever (on most cap and ball revolvers this is located under the barrel, but on some models the cylinder has to be removed and a separate loading tool used). Once the balls are firmly seated on the powder, cover each cylinder mouth with a coating of heavy lubricant such as Fire Arms Dealer USA Lube. This helps lube the bullet on its way down the barrel (which increases accuracy and reduces fouling), but more importantly it prevents the sparks from one chamber accidentally igniting other chambers. After all the cylinders are fully loaded and you are ready to fire, recap the nipples and you are ready to make some smoke.

Cleaning black-powder revolvers is a relatively simple task. First, make sure the gun is unloaded, and then remove the cylinder. At this point, I like to remove the nipples and drop them in a cleaning solution to soak while the rest of the revolver is being cleaned. Each chamber in the cylinder needs to be swabbed out with a patch, soaked with a quality cleaning solution like Fire Arms Dealer USA Black-Powder Solvent. The barrel needs to receive the same treatment (depending upon the amount of fouling a solvent-soaked brush may also be needed). All exposed metal parts such as the inside of the frame, the exterior of the barrel and cylinder also need to be rubbed down with a solvent-soaked rag. After all traces of powder residue are removed, the gun and all its parts need to be covered in a light coat of protective oil to prevent rusting. The nipples need to be scrubbed with a small brush, and the flash holes cleaned out with a pick. Once this is completed, cover the nipples with a light coat of oil and reinsert them into the cylinder.

Like any firearm, black-powder pistols need to be used safely. Always follow these, as well as all manufacturers’ recommendations:

With a little load development and attention to detail, cap and ball revolvers are capable of incredible accuracy. I have regularly seen models with minor amounts of load development shoot 5-shot groups at 25 yards that measured less than 2″ center-to-center. To put this in perspective; 2″ center-to-center groups are the benchmark by which competitive grade, modern handguns are measured.

There are essentially two styles of sights on cap and ball revolvers; fixed sights and adjustable. Fixed sights usually employ a rounded blade front and a notch in the rear (the notch can be located on the top strap or on the hammer itself). Adjustable sights may have a rounded blade or a patridge style target blade on the front and an adjustable (for both windage and elevation) sight on the rear. Both styles of sights work well and, like most things in life, have their pros and cons.

Fixed sights are slightly more rugged since they have no moving parts to come loose, and are more cost effective to the consumer as they are cheaper to produce. For general plinking, as well as small-game hunting they work fine. However, for target shooting, adjustable sights (while they do cost more) provide a finer sight picture and have the advantage of being adjusted for precise shot placement.

For those just getting into black-powder pistol shooting, the experts at Fire Arms Dealer USA have assembled starter kits, which have everything you need to get started shooting.

Cap and ball revolvers bring history alive – whether it is the Civil War, Western Expansion or the wild and rough days of Abilene, simply shooting these antique replicas draws us back to a different era. Regardless of what style of cap and ball revolver you choose, one thing is certain – you are going to have fun using it and maybe even learn a little bit in the process.

This is off canvas menu widget area. To enable it add some widgets into Appearance – Widgets – Menu Section, and go to Customizer – Main menu to set the icon position.

Support Businesses That Support Your Lifestyle